My father was born in Washington, D.C., in 1945 to the wife of a young naval lieutenant, serving out his time at the end of the war. They lived with another family in a two-room apartment. (Lest you think it’s tough to find a D.C. place in 2014.) The sailor, Kendrick, had been on an ordinance demolition team in the South Pacific but was now close to the end of his hitch and serving stateside. When his service was up he and Mary took their young family back to Connecticut, to Ansonia, where they piled into Mary’s overpopulated family home with her parents, her five brothers, and assorted spouses and offspring, all split between the house and a surplus Quonset hut in the yard.

Suddenly, this is more than a clearing in the woods: it is a jobsite. (Click any image for a larger version.)

Ken resumed his job as a draftsman at the bustling machine factory where he had met Mary just before the war. But that living situation had to change. The great thing about postwar America, of course, is that things got better for lots of folks. Land was cheap, oil was cheap, and you could drive to work from the countryside much of the way on hard asphalt everywhere along the eastern seaboard. 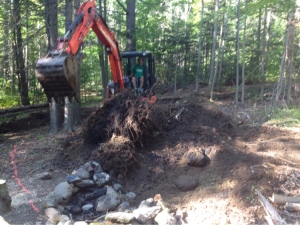 With Donn back and at the helm, stumping begins.

Speaking of stumps, this open pit was full of rotting wood and water. It went down quite a way and stank to high heaven.

We removed the effluent and wood, and back-filled it with the 60-year-old mound of dirt that stood next to it.

Stumping and smoothing the right-of-way.

A few years later Mary and Ken, one of Mary’s brothers, Bob, and his wife Dot, bought lots in a small country town about a 20 minute drive from the engineering office. One weekend they rented a steam shovel, dug a couple of foundation holes, and set to work. Eventually, Ken planted a double row of white pines down his northern lot-line. When they grew, the wind would whistle through their needles and remind him of his boyhood home in Maine. 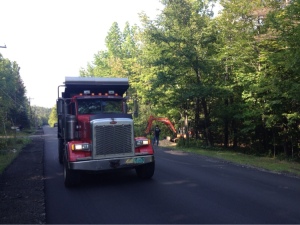 Bringing in the gravel…

…the four loads of gravel. And we may yet need another. Very heavy concrete-mixing trucks do not like to drive anywhere that might be even a bit soft. They get stuck. Stuck, is very, very expensive.

This is only a very little like that. But I think about it all the time.

Digging holes for the 11 piers that will hold the principal structure. Donn at the controls. I owe him so much, and we’re only just begun. 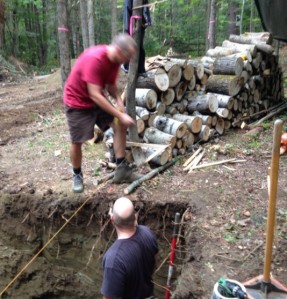 Placing the forms. After clearing we laid out strings to precisely mark the corners and edges of the build. String is magic: stretched tightly, it makes a perfectly straight line. Simple geometry and a long tape measure assure square corners.

The cardboard tube is known by its trade name “sonotube.” They each sit on a plastic, funnel-shaped form. When the concrete is poured, these will create feet to the columns and keep everything from sinking under the weight of the house, and me.

Base four feet below grade to prevent heaving by frost. We spent a lot of time climbing in and out of holes.

Ken would go on to be a successful engineer. Before the war, he’d hopped on a train in Portland, Maine and traveled out to tiny Tri-County College in northeast Indiana, sight unseen. It was the furthest he’d ever been from Falmouth. Tri-County had a three-year engineering program and would help a young man find housing and a job. He’d talked his way into a draftsman’s post and worked steadily to become a professional engineer. He holds several patents (owned by the company), and three of every four tires on the road came out of machines he helped design and perfect. He was a deacon of his church, a founding member of the conservation commission in town, a husband, and a father of three. 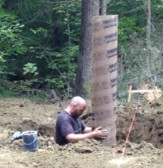 A plumb-bob is used to assure columns are vertical in each plane. The plumb-bob, or pendulum, is the most ancient device on this job, save, perhaps, a shovel or a hammer. You can build a pyramid with one, or just a cottage in the woods. It’s all the same to gravity.

The least ancient tool on the jobsite. The cone keeps him from gnawing on the new tattoo.

Tubes are cut to rough height. Precise level will be established with a transit. Flair optional.

Falmouth is unrecognizable as the dirt-road home he knew and you can’t get down to the water of Casco Bay where he’d stashed a boat in the pines. Now some of the dearest real-estate in the world, you couldn’t hide a thing there. The railway station from which he departed the Pine Tree State has been torn down and turned into a strip mall. The college has been consumed by another entity.

Nearly done for the day. Just as we placed the last tube, it began to rain. The bags will keep out water and, soon, wood chips as we take care of that pile in the background (and two more besides). Still two weeks before we can pour as we wait out the building permit.

The building where he worked is empty, as is the plant that executed his ideas. Its floors are scored with ruts from the huge machines that made the huge machines. Steel dust fills the cracks, footsteps deafen, motes drift in breathless galleries by opaque windows and through cavernous halls with great cranes on tracks that span the space. Massive leaden fire-doors slide aside, ponderous but smoothly counter-balanced, and boom back with great finality. The echo fades up and down stairwells that smell like carbon and, faintly, the salt of sweat.

Yet most of those machines are still running, doing what they were built to do. Most of the pine trees he planted are still standing, scrubbing the breeze. So is the house (notwithstanding the pines). And so are his three children. Two are engineers. One, my father, now sometimes works on machines his father designed, machines that were built in that empty factory in the Housatonic Valley and have traveled to Brazil, to Australia, to Germany, to China – sometimes more than once, outliving the men who dreamed them up, the children of those men, and, perhaps, their grandchildren as well.