Mallet and wedges, to make trees do what they’d rather not.

You know, I’m too damn blind.

It’s true. About 25 years ago my eye doctor told me that without corrective lenses I’d be legally blind.

I can tell you that my prescription has not gotten any weaker in the last 25 years and now, just when I thought I might’ve sorted myself halfway to respectably realized personhood, it’s getting worse in new ways. Used to be, I was near-sighted. Now, it’s looking like I’ll need — soon, not this year, but soon — both my contact lenses and readers. Or bifocals.  (No, I will never have bifocals. I can live with toenail fungus, but not bifocals.)

(Another aside: I’m old. I know this because I can use the word “soon” and not mean “within the next year.”)

I spent last week hiding from the rain and working on our trailer.  We’ve named the trailer “Clark.” There was no ceremony or anything  — no one broke a bottle of champagne over the prow/hitch as it slid backward down the (drive)ways and into the street (thank goodness). We just sort of started referring to it as “Clark.”  This is thanks to my old, old friend Brian (we went to school together from kindergarten through high school) who, upon seeing a photo of the wreck remarked “it’s a beaut, Clark.” It is, and so, it is. I’ll be doing some more work on Clark again this week. Whatever I am to houses, I am not to 50-year-old trailers.  And — again — this was supposed to be a temporary measure.

So. We spent the weekend felling trees.  I’m not even kidding: there’s no other word for it. I destroyed the toy Poulan I got from dad last week.  The guys at CZ Equipment said the cylinder was scored and the piston was warped. They held a little vigil, but there was no chance. With my early inheritance in an early grave, I rented a Stihl with an 18″ blade* from the Rental Center at Gano’s in Colchester. Look out, buddy. Business time. (You know when I’m down to my socks it’s time for business. That’s why they call them business socks.) 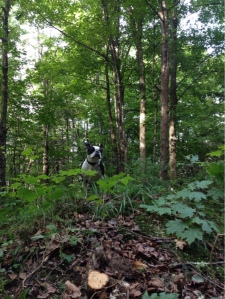 Brutus Of The Woods, in the woods.

Our little acre is in the middle of woods which are — according to the rings I counted — about 30 years or so undisturbed. Before they were left undisturbed they were logged at least twice, I think. The last time the company left what have become two or three “wolf” white pines, now standing chest, shoulders, and head above the young hardwoods around them. The babies on the lot are balsam firs that took hold after the first effort to market the location by putting in a roadbed to the back-lots behind us. Prior to that a full clear-cut strip is my guess, timber to lumber and the rest to the paper companies. And if my understanding of the history of Vermont is correct, before that, stripped for pasture. Sheep, most likely. 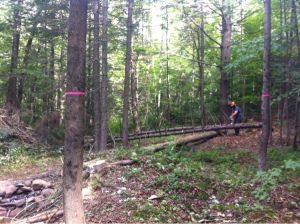 Donn The Forester’s method: define the site with surveyor’s tape. Cut everything to the knot side. Handy, simple.

With Donn’s help, last week we mapped a site. Our goal is to keep it as small as possible, allowing the trees to continue to hug the lot, to nestle our small (580 sq ft planned) cottage into an illusion of primeval verdure.

The right-of-way was well-established, with a compacted ramp of gravel and dirt now sporting a growth of balsam firs, with the occasional enterprising maple sapling. A thicket, but a well-defined one. The building site was visible to those with vision, but it needed considerably more in the way of actual lumberjacking. 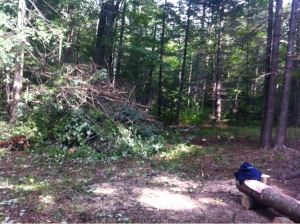 Brush pile, 13:00 on Saturday. It’s bigger now, and will get bigger still. The brush will be chipped to create a rough mulch for the jobsite, parts of the drive, and under the building. Very handy, and returns the nutrients to the forest, too.

Nothing falls like a felled tree. There is a great noise. Not deafening, but whole. Even with the chainsaw idling in my hand, there is more than the sound of leaves being plunged through air and the groan and crack of fractured heartwood. Trees are frankly mysterious. They communicate with one another, chemically. When the gypsy moths plagued the maples along the streets of my childhood, a tree under attack would release a chemical — a very special signifier — to the winds, warning its brethren that a plague had come. Trees, by virtue of chlorophyll, convert sunlight directly to food — a trick we could do with. We rely (and by “we” I mean anything not a plant) on plants; we are literally impossible without them. The irony of leaving a career in conservation to immediately begin carving up a small piece of forest has not been missed by me.

When a tree falls, you take life. Not that you shouldn’t. But you also shouldn’t ignore that or worse, miss it entirely.

They fall awesomely, with an inimitable sweep and grace. And in their falling, their mass and presence are unmistakable — crushing the things beneath them, driving their branches deep into the soil. And of course the sound: like a wave on the shore, and with tones both beneath and beyond hearing.

And then they are timber, soon to be lumber. I hope we will be able to use in the cottage some of the fir I’ve cut; I think it’ll yield at least a beam or two for the loft. In building, you work from bigger pieces of wood to smaller pieces: first, hefty 2x12s for the decking, then 2×6 for the exterior walls and 2x10s for the rafters. Then 2x4s for the interior. Then flooring and trim. You may begin with stout — perhaps a post of 8×8 or larger — then find yourself on the last day with a tiny piece of quarter-round in your hand. As the wood gets smaller the job goes slower, each stick bridging a smaller gap, serving a finer point. I’ve never before had a chance to start with a tree to end with a finial. Perhaps this time.

When a tree falls, it is heard — whether you’re there or not.

We swept the site mostly clean. I left two large aspens and two large firs for next weekend — the only practical place to drop them included the end of the clearing where we had set our tent and cooksite.  And we almost cleared the right-of-way to the road. I hit a rock with the chain trying to make a short stump and that ended the day on Sunday. Chainsaws are loud and burly and rugged. But if you dull a chain with a rock, you’re done. You’ll kill the saw if you try to force it on.

Amateur lumberjack tries to get the trees to fall where he wants. Cut a wedge perpendicular to the fall line, on the side that you want it to tip toward; a cut above and behind that. Basically. I think I batted about .700, which I thought not bad for lack of practice. 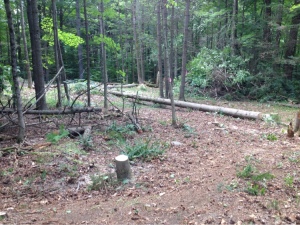 Standing close to the end of the right of way, looking toward the build site.

Rattling away in my helmet, hauling logs and cuttings, it’s hard not to think about the first white people to get this far inland. What did they find? What was it really like to clear a space in the trees and build a house? Both of us are feeling good as we work on this: the bluff work of moving wood, exposing ground, plotting a lot; they make you feel capable and useful in a way other kinds of work don’t always do. Particularly when you’re doing it for yourself, as opposed to at anothers bidding or to satisfy a job. You feel effective. You are both more human and more animal, directly shaping the landscape to suit you.

It made me wonder — for a short instant — if I’d have been better suited to a life 200 or 300 years ago. What would this have been? An axe and a hatchet. A crosscut saw, mebbe. Oxen, or a mule…but then there’s that whole blindness thing. I’d’ve been next to useless, really. If I’d have been fortunate to be born into a different culture than my European heritage, maybe I’d’ve been able to hack it as a medicine man with different sight. But otherwise, outcast and largely a burden. On the Oregon Trail? I wouldn’t have died of dysentery. I would’ve been left at home.

Sunday morning, at Jamie’s insistence, we measured out our eastern boundary with a string. I hadn’t wanted to bother, but lo and behold: we located the back pin of our troublesome neighbor. Our lots are mirrors of each other. Finding her pin, together with the graded (though overgrown) right-of-way, gave us total confidence in our borders and allowed us to move ahead with energy.

Looking down the right-of-way toward the site. About 30 feet remain to be re-cleared. 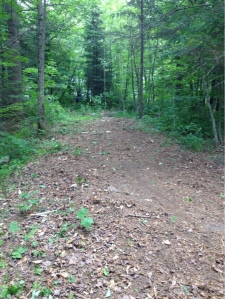 Looking back in the other direction. That’s the last 30 feet; then we can get the little RAV down to the build site.

A tarp for a kitchen. We’re stacking the hardwood (mostly maple and aspen) for future firewood. Firs and pines are either getting chipped for ground-cover or preserved as potential sources of lumber. I’ve also saved a fair number of straight poles for tarp support and eventually for deck rails and posts.

A well-earned respite. It’s already a place we like to go, even though it isn’t really remote, not very far from a road — it’s very far from here, in temperament and disposition. 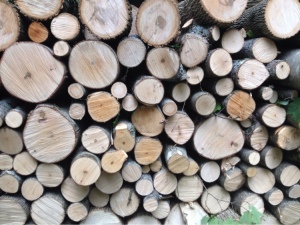 Next trip north, I’ll finish the clearing and maybe clean up the woods a bit. If Donn is ready, we might even start the site prep. It’s exciting. Where there was a northern jungle — lush understory, tall young maples, ash, and aspens, tangled thickets of spruce and balsam — there is a clearing in the trees.

*From Donn: “One edit- you cite the Stihl with the 18” blade- change that to 18” bar or folks will know that you don’t know what you are doing.”
I don’t know what I’m doing. Eh.

One thought on “You have died of dysentery”